How should a new employee behave during their first day at work? Hundreds of articles and books have been written about this by the most experienced HR specialists, so you can collect a whole encyclopedia. But in general, most of the advice boils down to the fact that you should be as loyal as possible to corporate rules, listen carefully and follow the orders of higher-ups.

And if the newcomer fundamentally disagrees with what is happening in the company? Literally from the first hours at the new workplace? Then, probably, any recruiter will tell you that this will not end in anything good for the newcomer. However, there are always pleasant exceptions.

One such exception is the story of this auto mechanic, who now runs his own auto repair shop in Auburn, Washington, but left Firestone a few years ago to look for a new challenge. The story, told by the author in his TikTok, went viral, gaining nearly 2.3M views and 269K reactions.

So the Original Poster quit from Firestone and got a job at a local repair shop. The OP admits that he was expecting an assistant manager job and didn’t want to do mechanical work again. During the interview, the owner asked the applicant various questions about his expertise, and the OP answered in such a way that at the end, he was sure that he was not expected to perform any mechanical work. 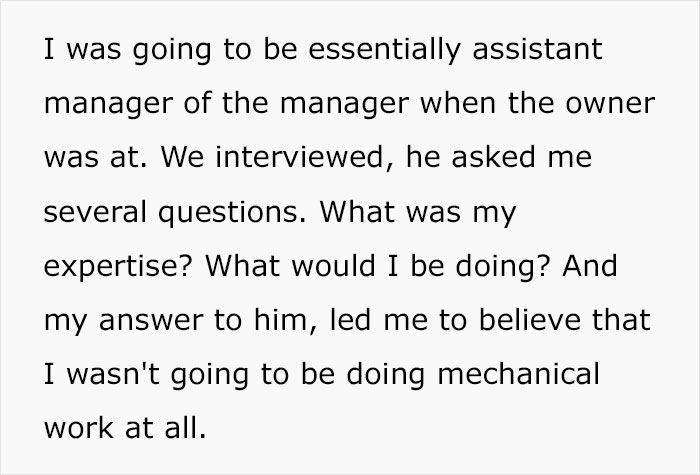 In fact, the owner needed someone to sell parts and run the front shop – and the OP, with his experience as a front-end mechanic, was a good fit for this position. However, when the OP came out on his first working day and the owner told him to diagnose the very first client’s car, he was a little surprised. 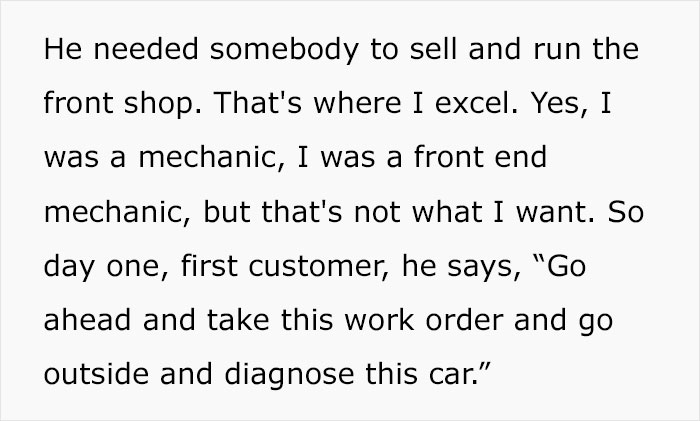 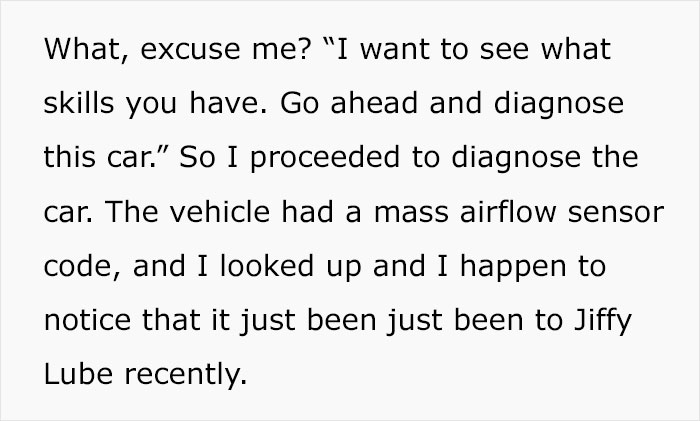 The owner explained that he would like to see what skills the newcomer had. He was satisfied with the explanation and went to inspect the car. The client had a mass airflow sensor code, so the OP decided to check what was the reason. He suspected that after a visit to Jiffy Lube, their specialists simply forgot to plug the mass airflow sensor into its place. 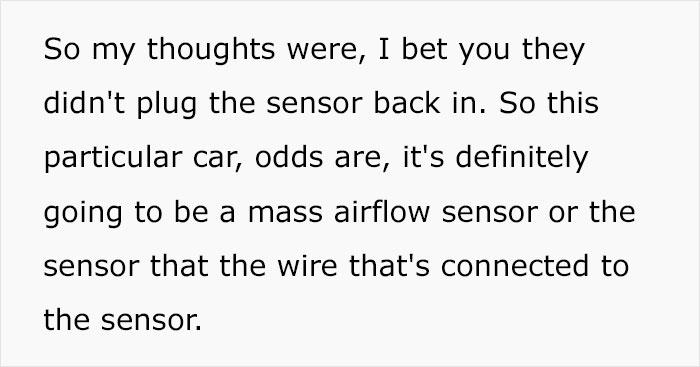 When the OP shared his thoughts with the owner, he just told him to sell the customer a new mass airflow sensor. But the employee insisted on checking – perhaps it was simply not plugged into place. That turned out to be the case – and when the OP put the sensor back in its place, the code was gone. 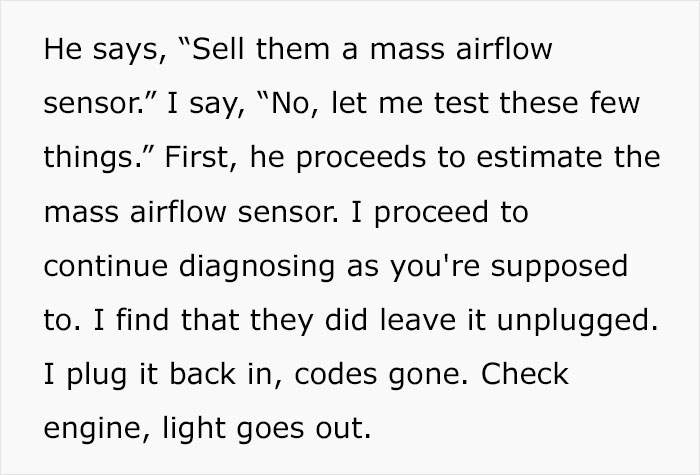 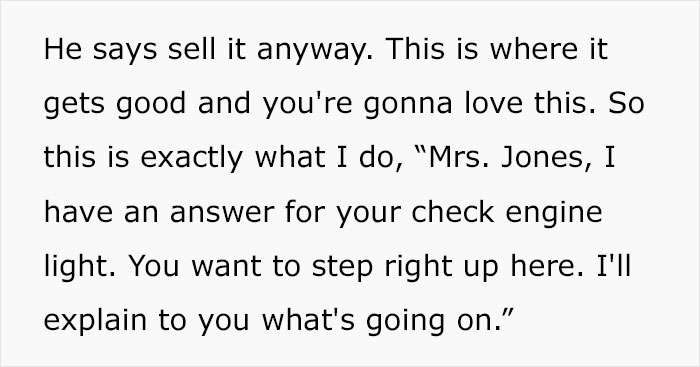 The OP fixed the minor issue manually, though the owner insisted he sell a new sensor instead

The OP told the owner that the issue was fixed, but he still insisted that the employee sell the sensor to the client. Then the OP approached the customer, asked her to step aside, and explained that he had manually solved her problem – because the Jiffy Lube service center workers probably simply forgot to plug the sensor back in place. 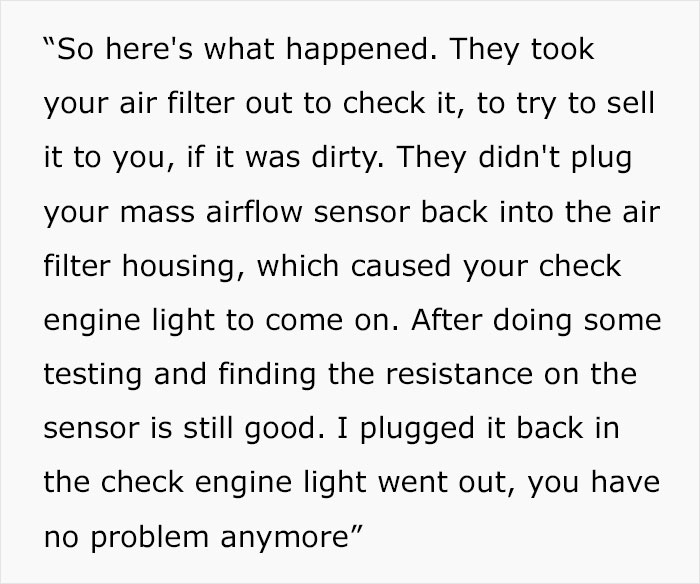 However, according to the OP, the owner of this store still required him to sell her a new sensor, which she did not need at all. Therefore, the OP continued, when the client left, he left after her – because this guy was a shyster and he did not want to work with this kind of person. The OP admitted that it was his first day on the job and that he quit four hours after starting it. 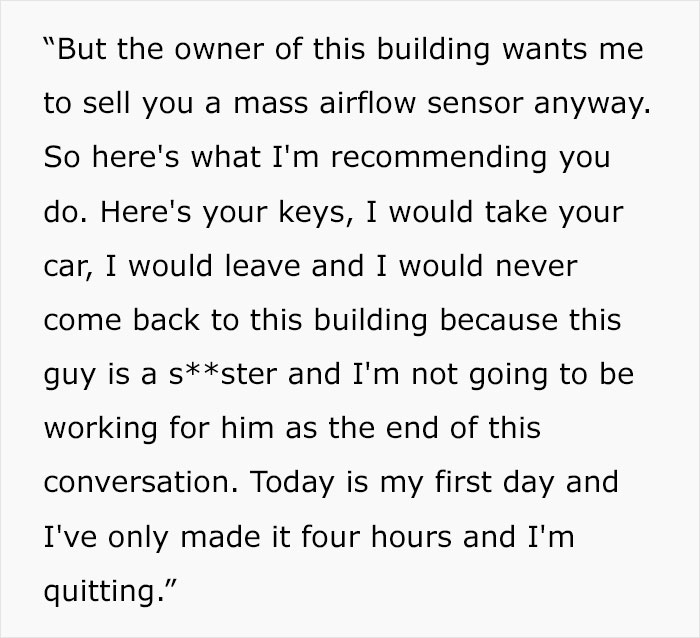 The woman sincerely thanked the mechanic for his concern and then gave him her business card and asked him to let her know where he’d be working next in order to continue servicing her car directly with him. 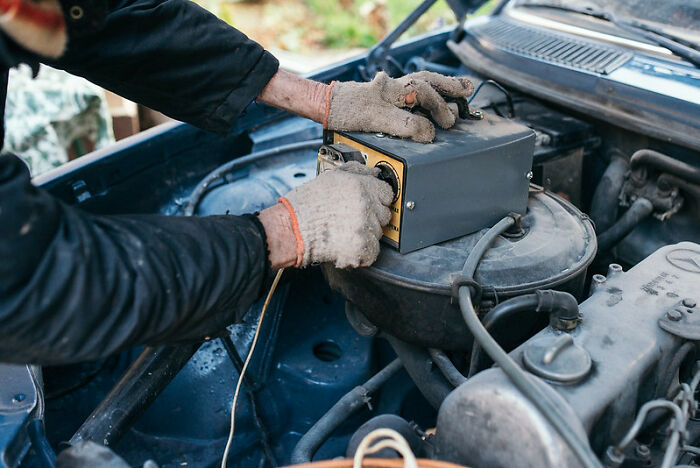 When the OP started his own business several years later, he succeeded as clients followed him themselves

That is why, as the OP said, when he started his own business a few years later, he succeeded. Because people themselves follow him, and an honest and humane approach to the customer always resonates in the hearts of people.

@dirty2dreamyllc #answer to @tiktok_qna I couldn’t believe what this owner actually asked me to do. It was a no from me and I left 4 hours after I started #smallbusiness #autodetailing #cardetailing #detailers ♬ original sound – Dirty2DreamyLLC

People in the comments massively praised the OP for being so principled and wished him continued success in business. Also, as it turns out, a lot of people share the OP’s beliefs. As one of the commenters admitted, he has owned his repair shop for 37 years and has always tried to do the right thing and take care of his customers.

Moreover, according to some people in the comments, any person should trust their auto mechanic in the same way as they trust a doctor – after all, the life of the driver and others largely depends on the car mechanic’s conscientiousness. And, according to most commenters, the OP is just an awesome person.

We must say that people often face such dishonest employers on their life path. For example, the owner of a small clothing store asked this woman to record a video resume, and this applicant was offered a salary significantly lower than advertised at an interview when the higher-ups found out he hadn’t worked for two months. And if you have had similar strange stories about employers as well, please feel free to share them in the comments to this post.